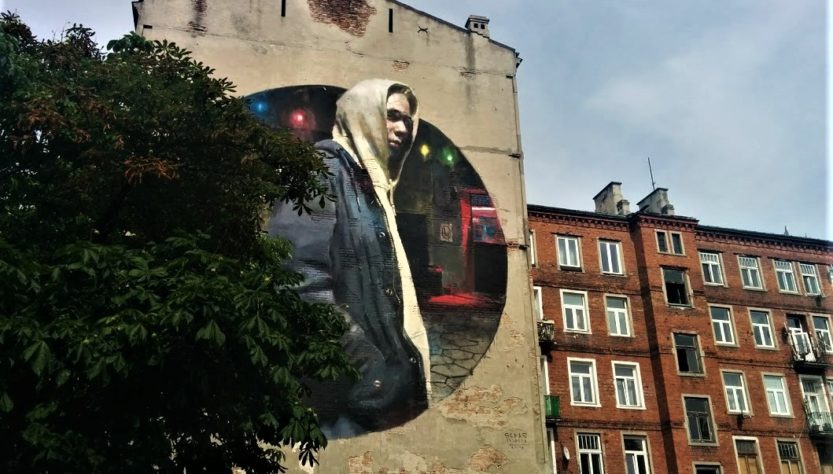 Warsaw is becoming an interesting destination for public art enthusiasts. New sculptures, instalations and murals have appeared throughout the city in recent years. They are designed by both local and international artists.

A wellknown project by Joanna Rajkowska is called „Greetings from Jerusalem Avenue”. A life sized artificial palm tree stands in the middle of Charles de Gaulle Circle on Jerusalem Avenue. It refers to a earlier Jewish village in Warsaw known as New Jerusalem which existed hundreds of years ago in the which is now Zawiszy Square. This is origin of the name of Jerusalem Avenue and what Rajkowska seeks to reminisce.

In the courtyard of the Cosmopolitan tower (Twarda 2/4 Street) designed by world famous architect, Helmut Jahn, there is an interesting moving sculpture installation called „Me and You”. It`s the artwork of an Israeli artist Eran Shakine whose works are displayed in some of the most prestigous museums and galleries around the world. It`s an 8 meter tall ramp with figures of a man and a woman standing on a opposing sides of a ramp facing each other. The entire cycle of movement lasts 8 hours so it`s invisible to the human eye. The figures move higher, lower or equal to each other symbolizing constantly changing human relationships.

Several international street artists have painted murals on many walls of the tenament houses in Warsaw’s Praga district. One of the most interesting (Strzelecka 26 Street) is the work of a Spanish artist from Bilbao, Sebasa Velasco. The artist takes a picture of an area first and then he paints the wall. In Praga we see a man in a hoodie with a Polonez car in the background (a car produced during communism era in Poland). This is a scene from one of Praga`s courtyards at 11 Listopada Street and everything on the image is authentic. This mural is considered as an example of Praga`s street art pride.

The real mekka for public art lovers is the Bródno Sculpture Park (Park Rzeźby na Bródnie). It`s a big park surrounded by tall block buildings from the 1980s in the Bródno district. The project was inaugurated in 2009 and it`s still developing. Every year some different artist creates his own work here. You can see sculptures of many world renowned artists like Olafur Eliasson, Rirkrit Tiravanija and Paweł Althamer – one of Poland’s most famous artists worldwide. This place is a must see for those who search for more than just your typical tourist attractions.