These two residential neighborhoods belong to the Ochota district. They contain several interesting housing estates developed in the interwar years. There was heavy fighting here during World War II but the scale of damage was not as big as in the city center. This is one of a few areas of Warsaw where many prewar residents returned after the war to their own houses.

The Filtry Lindleya are the oldest buildings in the area. It`s the city`s water filter system constructed in the 19th century by British engineer William Lindley. After so many years it still supplies the city with water. It`s surrounded by streets: Filtrowa, Raszyńska, Koszykowa and Krzywickiego. From this place the rest of the neighborhood took its name – Filtry.

The most charming of Filtry’s housing estates you will find on streets: Filtrowa, Dantyszka, Langiewicza and on other surrounding tiny streets. It`s a very calm and green area with beautiful family houses mostly from the 1920s. Władysław Szpilman, the famous pianist shown by Roman Polański in the “Pianist” was hiding at Aleja Niepodległości 223. The German officer who found him there allowed Szpilman to stay only if he played the piano for him.

Narutowicza Square is the main square of the Stara Ochota neighborhood with the Church of the Immaculate Conception of the Blessed Virgin Mary as the most significant landmark. This medieval looking church was designed in the 20th century. The architect Oskar Sosnowski used modern reinforced concrete construction and architectural forms from different Polish Romanesque churches. The tower contains bullet traces from the Warsaw Uprising in 1944 on its western side.

Not far from the church there are many interesting apartment houses especially along streets: Akademicka, Grójecka, Mochnackiego, Glogera, Wawelska and Mianowskiego. This area contains more residential buildings and fewer family houses than Filtry.

If you’re looking for a cafe, go to Kolonia with good coffee and cakes. This place is child friendly, in the back there is a garden with a few tables and a small playground (Łęczycka 2). The Filtry Cafe is a more hip place with an easy going young crowd. Here you have a large variety of coffees including a drip coffee. Calm dogs are welcome (Niemcewicza 3). The Szczyt Wszystkiego is a very active club-cafe with concerts, slide shows and workshops (Tarczyńska 5/9). If you like Italian cuisine, you should definitely try a thin as paper pizza at Nonsolo Pizza (Grójecka 28/30). 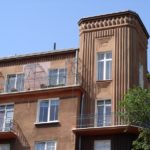