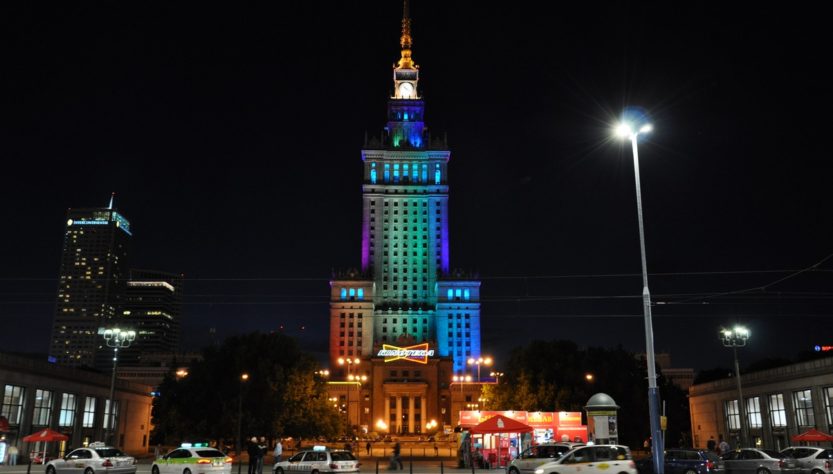 The giantic Palace of Culture and Science was built just in three years between 1952 and 1955. It was Joseph Stalin’s idea: “a gift of the Soviet people to the Polish nation”. For Polish people it symbolized Russian domination. It stood right in the middle of the pre-war city center, and there had never been such tall buidling in Warsaw.

The building was designed by Russian architect Lew Rudniew, the designer of similar skyscrapers in Moscow. Since then it’s been one of the largest buildings in Poland, standing at 230.5 m (42 floors) with an area of 817,000 square-meters and over 3000 rooms.

It includes offices, schools, museums (Muzeum Techniki), libraries, theaters (Teatr Studio, Teatr Dramatyczny, Szóste Piętro) and the biggest concert hall in Warsaw – The Congress Hall (Sala Kongresowa) that has hosted many great artists such as Marlene Dietrich, The Rolling Stones, Bruce Springsteen and Cesaria Evora. Its multiplex cinema, Kinoteka, hosts the Warsaw Film Festival, Planete + Doc, among many other film festivals. In less then 20 seconds you can reach Warsaw’s highest open air observation point at the 30th floor. Here you can see the gorgeous panorama of Warsaw. There are also very cool bar-clubs: Kulturalna and Bar Studio.