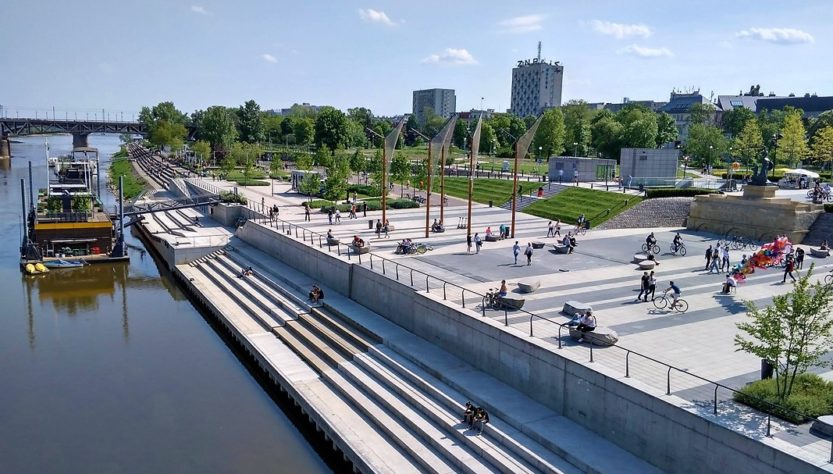 Over the last few years this neighborhood has become the new Warsaw must see. What makes it special is its access to the Vistula river. In summer time the boulvards are filled with thousands of people.

In the 19th century Powiśle became the city`s industrial district and it was populated by poor workers. Local newspapers kept writing about terrible living conditions here. Nowadays new modern apartments in this neighborhood are some of the most expensive in Warsaw. In 2020 The Guardian placed Powiśle among the ten coolest neighborhoods in Europe.

Powiśle is also a student area, mostly because of Warsaw University Library. This building is an important landmark from the late 1990s. Its architecture is a mix of steel, concrete, glass and plants. There is a gallery where you can buy original posters of the Polish School of Posters, an important artistic phenomenon during communist-era. Definitely go to the roof where you have one of the biggest roof gardens in Europe, available from April to October (Dobra 56/66 Street).

Copernicus Science Center is a perfect place to go with children. Over the last years it has been one of the biggest attractions in Warsaw. It`s a science museum opened in 2010 with over 450 interactive exhibits. During the first 5 years it was visited by over 5 million people (Wybrzeże Kościuszkowskie 20 Street, www.kopernik.org.pl).

Another significant place is right behind the Library. It`s the temporary location of the Museum of Modern Art in Warsaw. The pavilion was designed by Austrian architect Adolf Krischanitz. Before it stood in Berlin for a couple of years. The building is covered with artworks by Sławomir Pawszak. It also houses a bookstore and Paloma cafe-club. It`s among the best places along the river. On weekends it turns to a club (Wybrzeże Kościuszkowskie 22 Street).

The recently opened Eletrownia Powiśle is an old power plant transformed into a commercial complex. Historical buildings were restored and surrounded with modern architecture. The oldest structure of the actual power plant houses a department store. Besides well-known shops such as Urban Outfitters you can find numerous boutiques of Polish fashion designers. I like it mostly for its architecture. Inside on its construction you can find bullet holes from World War II. Some elements of the power plant`s old equipement was saved and reused, jest look around and try to find them.

Powiśle offers a variety of good restaurants and cafes. Nadwiślański Świt is an easy going restaurant with European cuisine. It`s quite popular so it`s probably a good idea to have a reservation (Wybrzeże Kościuszkowskie 31/33 Street, phone: +48 733 185 812). The same about Kafe Zielony Niedźwiedź as this place is a more fancy restaurant. The food is extraordinary and it`s considered one of the finest restaurants in Warsaw. It also offers an impressive wine selection (Smolna 4 Street, phone: +48 795 794 784).

If you’re looking for a comfortable and cozy cafe, go to Caffe Kafka known for book exchange. In summer time there is nice green space with beach chairs outside. STOR Cafe is a trendy urban cafe where you can get a good cup of chemex or aeropress coffee (Tamka 33 Street). 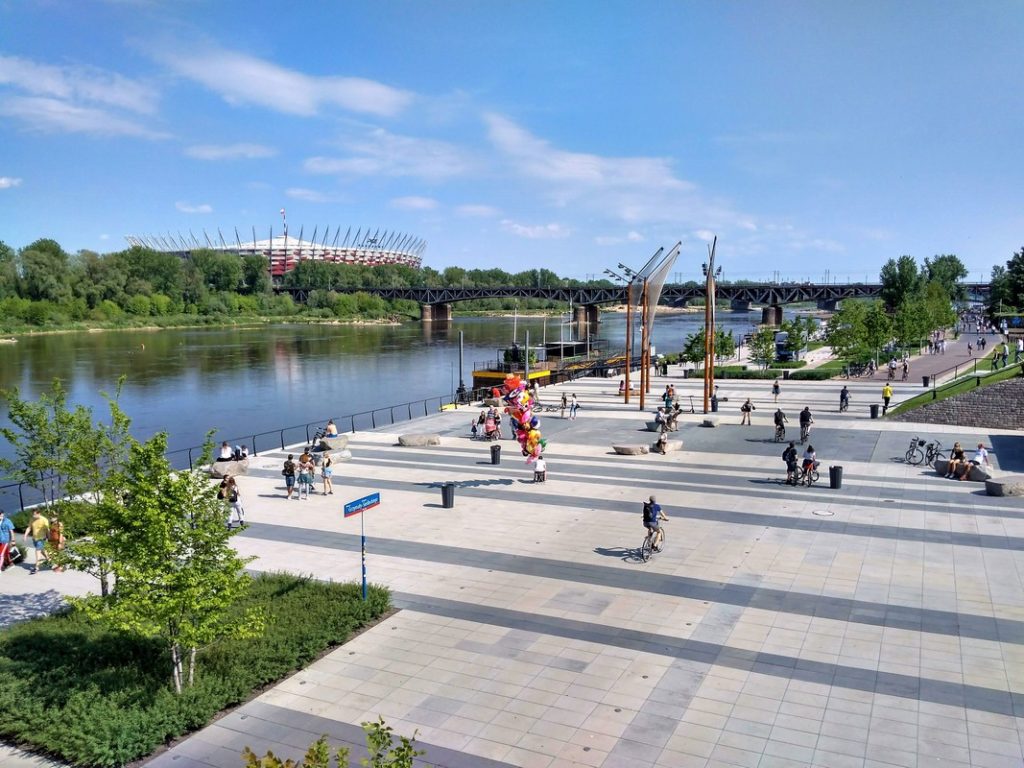 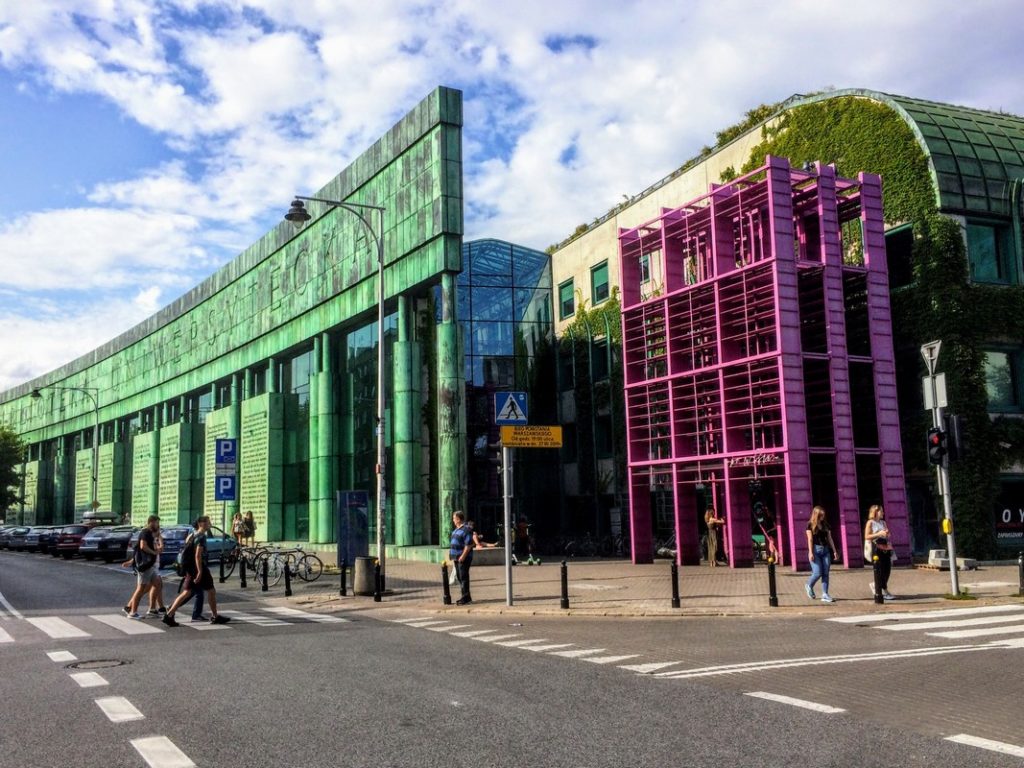 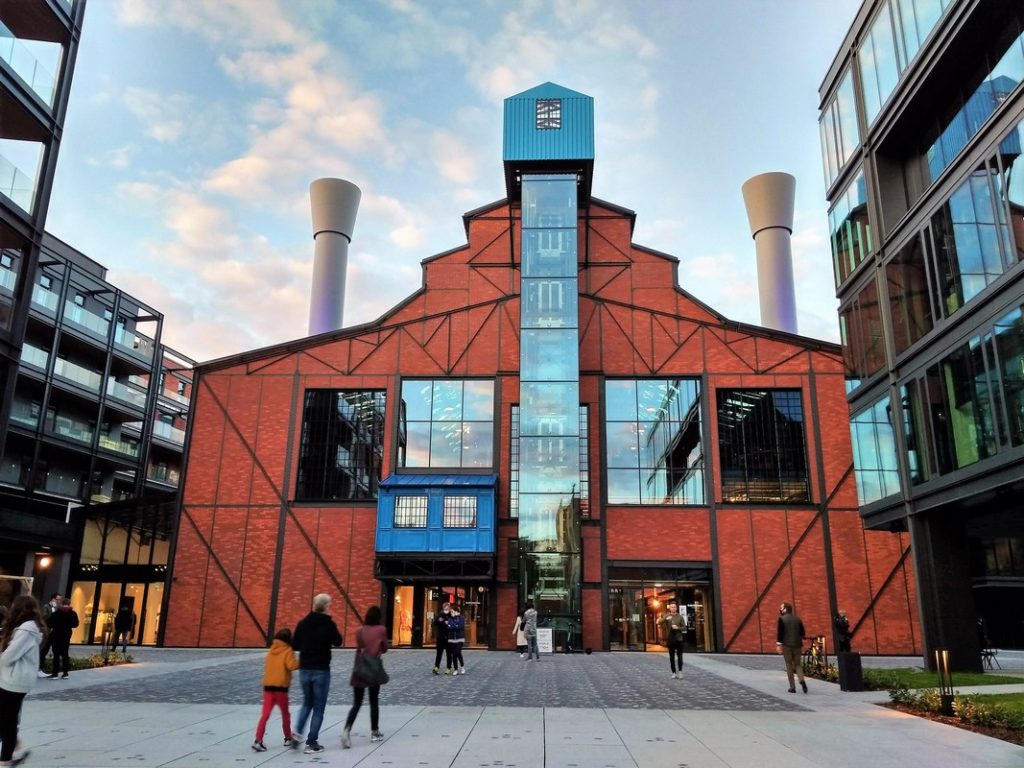