Żyrardów was settled in the 19th century as a textile manufacturing hub. After Łódź city is the most significant place in Poland related to the Industrial Revolution era. It’s the only complete 19th-century urban industrial complex to be preserved in Europe, and one of the most important Polish historical monuments. However, it’s largely unknown to visitors and locals, even though it’s located just 40 minutes from Warsaw.

The history of the town began in 1833, when Karol Scholtz et Comp. built a factory on this land, in the middle of nowhere. It was the first flax factory in this part of Europe. The town’s name comes from the surname of its first Technical Director Philippe de Girard, a French engineer and inventor of the first flax spinning frame. His monument stands today in the city center of Żyrardów on 1 Maja 45 Street.

In 1857 due to the company’s debt, Bank Polski decided to sell the factory. Two private entrepreneurs from Austria, Karol August Dittrich and Karol Hielle arrived in Żyrardów to become the new owners of the complex. They put a lot of effort into expanding it. Soon the town flourished. It was the biggest linen producer in Europe with brand shops in Warsaw, Poznan and Saint Petersburg. It was awarded at fairs in Paris, Vienna, Berlin and Moscow.

The first workers movement in Poland 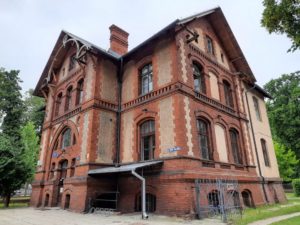 Red-brick industrial buildings housed factories, workers housing, villas of manufacturers, and many public buildings such as schools, kindergarten, fire station, hospital, baths and laundry facilities, soon also cultural clubs and a cinema. It was the most significant chapter in the city’s history. However, the Industrial Revolution brought human exploitation like everywhere else in the world in similar manufacturing centers. People were working in terrible conditions even for 16 hours a day.

Here, in 1883 the first women’s strike in the history of Poland took place. It was organized by bobbin winders who faced a cut of around one fourth of their daily wages. They also fought for humane working hours, lower rents and against hiring children under 15 at the factory. They did the most difficult and unhealthy work, so the average life expectancy was 35.

Male workers joined the strike, and soon many protesters experienced brutal repressions, but, ultimately they were heard, and created the first and the biggest workers movement of its time in Poland. 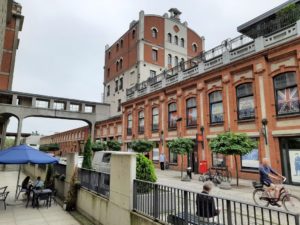 Industry in Żyrardów is gone, and the old industrial buildings are slowly being transformed into lofts, shops, museums, restaurants and hotels. Stara and Nowa Przędzalnia, once spinning mills, are the best examples of such changes in the city. It`s worth visiting the Church of Our Lady of Consolation located nearby. It was designed in Neo-Gothic style by a prominent Polish architect Józef Pius Dziekoński and it stands on the former market square. The best food you can find in “Telegraf” on 1 Maja 34 Street. Their “gołąbki”, Polish style stuffed cabbage rolls in tomato sauce are simply amazing. They are served on a huge cabbage leaf, and it`s the best gołąbki I`ve had in my life. 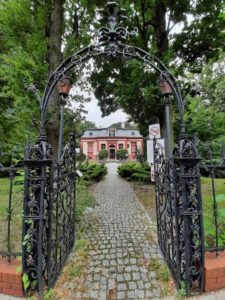 In Żyrardów you can also rest surrounded by greenery in the historical 19th century Dittrich Park, once a private park of the former owner of the factory Karol August Dittrich. Here you can visit his palace which now houses the Museum of The West Mazovia Region.