Bródno is known as one of Warsaw “bedrooms”, it`s full of block buildings from communist period. Paweł Althamer, one of the most famous Polish contemporary artist was born and still lives here. He wanted to do something for Bródno residents and he came up with an idea of park of sculptures created in the Bródnowski Park. 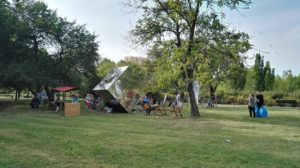 It`s a project that involved Bródno residents, the Museum of Modern Art in Warsaw and Targówek district authorities (Bródno is a part of Targówek district). The Sculpture Park  was opened in 2009 and it became one of the most recognizable public art spaces in Poland. There are great pieces of art created by Polish and foreign artists invited to the project: Paweł Althamer, Youssouf Dara, Olafur Eliasson, Jens Haaning, the Nowolipie group, Susan Philipsz, Katarzyna Przezwańska, Monika Sosnowska and Rirkrit Tiravanija.