Muranów is a special area in Warsaw`s history located adjacent the Wola and Śródmieście districts. Most of it was incorporated into the Warsaw Ghetto during the World War II, the largest Jewish ghetto created by Nazis in Europe. After the Ghetto Uprising in 1943 it was completely demolished as punishment for the rebelion. It was already after the deportations of the majority of Ghetto prisoners to Treblinka death camp. 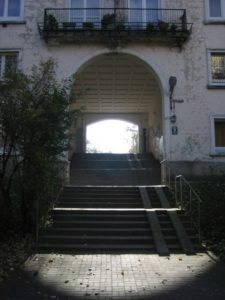 The new housing estates were built using a new technique invented for this specific project. Pieces of destroyed buildings (even wooden elements) were ground to make a new kind of brick that was used to build new buildings. This means that today`s Muranów is a district built from ruins, and on the ruins of the Ghetto. Some buildings stand much higher than others. This is because it was impossible to clean the whole area. To appreciate this go upstairs behind the Kino Muranów (Muranów Cinema) on Andersa 5 Street and walk around the courtyards. You will see many stairs taking you up and down, understanding that just below the top soil are the ruins of Muranów .

Nowadays in this area you have some really important landmarks. The Ghetto Heroes monument is probably the most important monument for Jews from around the world. It shows Mordechaj Anielewicz, the leader of the Ghetto Uprising with other fighters. It was designed by Nataniel Rapaport in 1948 (Zamenhoffa Street). In 2014 on the same square the Museum of the History of Polish Jews POLIN was opened. It received the very prestigous Eurpean Union award as the best new museum in Europe. The building itself is a gem of modern architecture. It has won several architecture awards (Anielewicza 6 Street, closed on Tuesdays). Not far from here there is another important monumet – the Umschlagplatz. It comemorates Jewish victims’ deportations to the Treblinka death camp in 1942.

The Polin Museum is not the only cultural institution in Muranów. The Warsaw Chamber Opera was founded in 1961 and it`s known for its Mozart Festival held in June and July. The repertoire presents different musical styles, from medieval mystery plays to Baroque operas, classical pantomime as well as music of contemporary composers (Aleja Solidarności 76B Street, operakameralna.pl). Kino Muranów is my favorite film theater in Warsaw. If you want to see the newest films of such directors as Jim Jarmusch, Paolo Sorrentino, Lars von Trier, Takashi Miike, Pedro Almodovar or Francois Ozon this is the place. Kino Muranów also hosts festivals like Jewish Motifs, Five Flavors or Watch Docs (Andersa 5 Street, kinomuranow.pl). 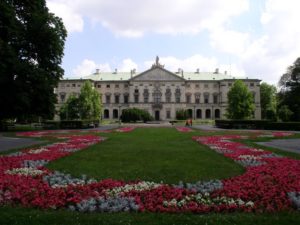 This neighborhood also contains one of the finest gardens in Warsaw, the Krasiński Garden. It`s surrounded by streets: Bohaterów Getta, Świętojerska and Plac Krasińskich. In the park you can admire the Krasiński Palace, one of the most beautiful aristocratic palaces in Warsaw.

There are few places important for the local community here also. The Państwo Miasto is a big cafe, but it’s also a co-working, workshop and conference space. On the menu you can find sandwiches, salads, burgers, fish and some vegan options as well. Breakfasts are served from 9:00 am to 12:00 during the week and from 9:00 am – 1:00 pm on weekends. Państwo Miasto is also a well equipped bar with lots of craft beers and stronger alcohols. In Muranów this is where you go to have a drink in the evening (Andersa 29 Street). Just few steps further you can eat in the Bar Gdański reopened after renovation in May 2017. It`s one of the famous milk bars (bar mleczny) that you hear about in Warsaw. The new updated version of the Bar Gdański looks very cool and trendy, but it serves the whole local community, regardless of age. The list of meals and prices hasn`t changed (Andersa 33 Street). To eat more fancy go to the U Kucharzy, where you can taste traditional Polish cuisine while watching the cooks in the kitchen. If you order beef tatar, a cook will prepare it for you next to your table (Długa 52 Street).