Marie Skłodowska – Curie was born in Warsaw on 7 November 1867. She was a genius physicist and chemist, a pioneer in research on radioactivity. She was the first women to win a Nobel Prize, first two-time winner and the only person who was awarded in multiple sciences. Together with her husband Pierre Curie she got her first Nobel in 1903 for physics, and then again in 1911 chemistry. She was one of the most famous scientists of her time. 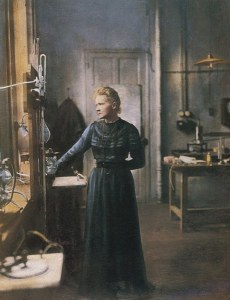 Maria Skłodowska was born in Warsaw on 7 November 1867. She was a daughter of a teacher. Her mother was running a school for girls on Freta 16 Street in Warsaw Old Town. Nowadays there is the only biographical museum of her worldwide. After first year of her life her family moved to a different house on Nowolipki Street, that house was destroyed durin World War II. In 1891 she went to Paris to study physics and mathematics at the Sorbonne where she met Pierre Curie, professor of the School of Physics. They were married in 1895 and worked together on radioactivity field. In 1898 they discovered a new chemical element, polonium. In the next year, they discovered radium. Together with their co-worker Henri Becquerel, were awarded the Nobel Prize for Physics in 1903.

In 1906 there was a tragic accident, Pierre Curie was knocked down and killed by a carriage. Marie was offered to take over his department and she became the first female professor at the Sorbonne. She received a strong opposition from male scientists and never got significant financial benefits for her work. She continued her research and in 1911 she received a second Nobel Prize for Chemistry. In 1913 in Bristol Hotel in Warsaw, in Malinowa Restaurant there was a banquet in honour of her.

She founded The Institut du Radium in Paris and Radium Institute in Warsaw, major centers of medical research today. During World War I, she established the first military field radiological centres. She drove one of the 20 cars with X-ray machines to the front lines where she trained nurses and doctors about radiology. Her project saved tousands of lifes.

Marie Skłodowska – Curie died in 1934 from leukaemia after years of exposure to radiation. In 1995 she became the first woman to be entombed in the Panthéon in Paris. She always started her speeches with words, “I was born in Warsaw”. Albert Einstein said that she was the only scientist that wasn`t spoiled by fame.