The original shop and cafeteria of the oldest chocolate brand in Poland. It was opened in 1894 in an elegant apartment house which was one of the few buildings to survive World War II in this area. You can see several Wedel`s cafes in Warsaw but this one is the one you should visit. 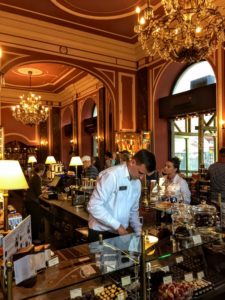 E. Wedel was established in 1851 by Karol Wedel who moved to Warsaw from Berlin. His son Emil received the father`s company as a wedding gift after spending two years in Paris learning the confectionery craft.

In 1865 he moved the chocolate production to a factory on Szpitalna Street. In 1893 right next to the factory he built an apartment house where one year later his famous confectionery and shop was opened. In 1930 the production moved to a new big factory in the Praga district.

The cafeteria containts original 19th century furniture and paintings of Wedel`s family. It hosted many famous Polish celebrities such as Henryk Sienkiewicz – the winner of the Nobel Prize in Literature and Boleslaw Prus, also a writer.

Wedel`s Chocolate Lounge offers exceptional hot chocolates in different flavors (I like the gingerbread and pistachio) and other sweets, including a variety of ice cream desserts. In the Staroświecki Sklep (which means “an old-fashion shop”) you can buy hand-made pralines that Wedel is famous for.