The Holy Cross Basilica is one the most important Baroque churches in Warsaw. It`s a resting place of Frederic Chopin`s brought to Warsaw by his sister Ludwika. It was the composer`s last will before he died in Paris in 1849. The heart was enshrined within a pillar.

The church`s history starts in the 15th century when a small wooden chapel of the Holy Cross was constructed here. It was expanded through the centuries to meet the needs of Warsaw’s population. The church we see today was designed by Józef Szymon Belotti. The two towers were designed by Józef Fontana and the sculptures were created by Jan Jerzy Plersch, a famous Polish sculptor.

Polish King Stanisław August Poniatowski used to visit this church frequently. The Basilica was the location of the first anniversary celebration of the May 3rd Constitution, the first in Europe, and second in the world after the United States. During the World War II the church was completely destroyed and reconstructed after the war. 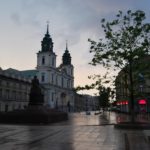 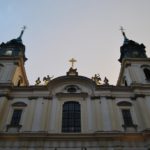 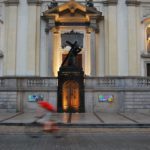