This beautiful square is a great illustration of Warsaw`s history and its transition into future. It`s a part of the old Jewish Quarter and location of the Warsaw Ghetto. When you look around you will see architecture from different centuries mixed with each other: the All Saints Church from the 19th century, “blocks of flats” from the 1960s, Cosmopolitan Tower built in the 21st century and more.

The square was renovated few years ago and features a wonderful green space full of benches and a pond with a small waterfall. On the Eeastern side of the square and Próżna Street you can find several cafes and restaurants (Charlotte Menora, Cafe Próżna). Some of them are housed in residential buildings from the 19th century. Before the war they were occupied mostly by Jewish residents.

Main characters from “The Family Moskat” of Isaac Bashevis Singer, lived on the Grzybowski Square. Although, there is not much left, from what Singer discribed. It`s sad, but this is how Warsaw`s history is. 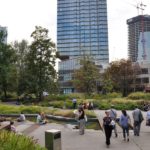 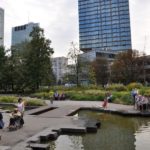 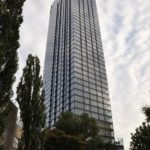