Church of St. Joseph of the Visitationists is known commonly as the Visitationists Church. It`s a pearl of the Warsaw Baroque period, and one of the greatest in Poland. The Visitationists (Salesian Sisters) were brought to Poland by Queen Maria Ludwika Gonzaga. First church built in the 17th century was made of wood and it burnt quickly. 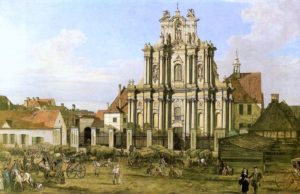 The present church was built in the 18th Century. Its facade is a real masterpiece with pairs of columns in two depths creating light and shading effects. It was painted by Bernardo Bellotto, also known as Canaletto, the royal court painter of the last Polish King Stanisław August Poniatowski. Inside you can see its Rococo pulpit in the form of a ship. It symbolizes the Church which drifts among storms and hurricanes as an unsinkable ship. The angel on top holding a sail seems to really be flying. The pulpit was made in the workshop of Jan Jerzy Plersch, one of the best known Polish sculptors.

Next to the church are the convent buildings, some of them were constructed of wood at the end of 17th Century. The church and the convent buildings survived until today with no changes which is really unique considering the destruction of Warsaw during World War II. Also of historical significance, a young Frederic Chopin used to play the organ in this church. 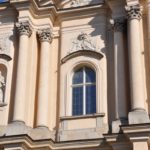 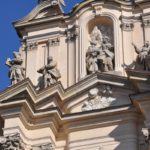 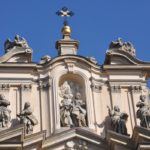