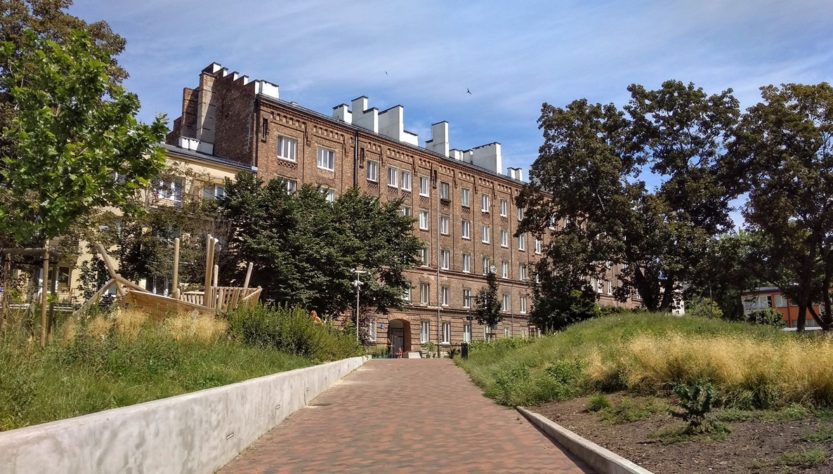 The Kolonia Wawelberga was funded by the Hipolit and Ludwika Society for Affordable Apartments and completed in 1898. Hipolit Wawelberg was a Jewish banker and philanthropist who wished to create affordable flats for workers living in Wola, an industrial district of Warsaw. He couldn’t accept the inhumane living conditions in this area. It was the first workers settlement in Warsaw’s history.

Hipolit Wawelberg was born in Warsaw in 1843. He owned the Wawelberg Bank that he inherited after his father Hanryk. The father`s carrier could be simply described as “from rags to riches”. He was a worker and son of a poor porter. His extraordinary talent for business eventually allowed him to open a bank.

Hipolit was a philanthropist, sensitive to the weakest. His wife Ludwika was a member of Berhson family, also active in charity work. Her grandarents founded a hospital for Jewish children. That building still stands in Warsaw and in a couple of years it`ll become the seat of The Museum of Warsaw Ghetto. Hipolit and Ludwika created a society of their name that built the colony. It was located in Wola District, an industrial area of the city with terrible living conditions. Here a room could be occupied by two or three families. Wawelberg offered workers decent apartments for a little money.

It was also a social experiment. Apartments were available to people from different classes, professions and both, Jews and Christians. Wawelberg believed that living that close would help people to understand each other better.

During Warsaw Uprising of 1944 residents of Wola District experienced one of the most tragic events in German-occupied Warsaw. Adolf Hitler enraged by the fact that the Polish Underground started the uprising ordered to destroy the city and kill “anything that moves”. The Germans killed approximately 50 000 civilians in Wola including almost all residents of the colony. These events are known as “Wola Massacre”.

Wanda Lurie was probably the only survivor in the colony. During executions she was begging for mercy holding hands with her three children, but all of them were killed. Wanda got several shots being eight months pregnant, but she didn`t die. After laying for two days under dead bodies she realized her unborn baby was still alive too. Wanda started fighting for live and she menaged to escape. Soon she was captured again by the Germans and sent to a transition camp in Pruszków. Two weeks later she gave a birth, and with her newborn son Mścisław survived World War II. He still lives in Warsaw. In 2007 I had a great pleasure to meet his daughter Monika during my first trip to Israel. We took part in Taglit – Birthright Israel program. She told us her family story and for me it was one of the most memorable moments of this journey. Wanda Lurie passed away in 1989, and in 2005 a square near the Wawelberg Colony was named for her.

About last night🎶 The largest demonstrations in