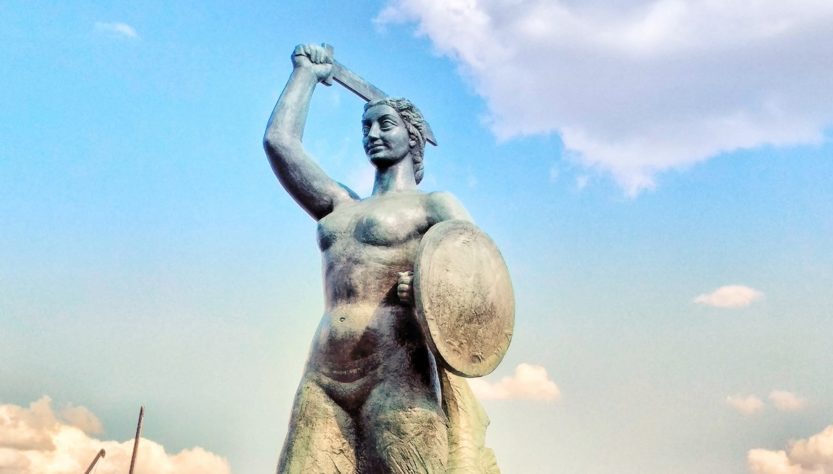 The Marmaid of Warsaw (Syrenka Warszawska) is a symbol of the city represented on the city’s coat of arms. There are few statues of her in Warsaw but this is the most famous one. It became a symbolic monument to a girl who posed for it, and who died tragically during the Second World War while protecting her friend. 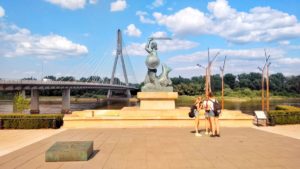 Marmaid has been appearing on drawings and paintings since the Middle Ages. However in the beginning the creature looked like an animal with a bird’s legs and a torso covered with dragon scales.

There is also a legend about marmaid and there are several versions of it. The most popular one, in short, is about a marmaid being seen on the bank of the river, singing beautifuly. Her voice attracted Warsaw fishermen who fell in love with her. They rescued her after she was kidnapped by some rich merchant. To show her gratefulness, she stayed in Warsaw to defend the city. That`s why she is always armed with a sword and shield.

The Marmaid standing next to the Świętokrzyski Bridge was designed by a prominent Polish artist Ludwika Nitschowa in 1937. Krystyna Krahelska who posed for this modernist statue was a poet, ethnographer and a member of the Home Army as a nurse during the Warsaw Uprising of 1944. She got shot three times in the chest while rescuing her wounded friend, and she died the next day.

She was promoted to the rank of army sergeant posthumously, and awarded several medals. This statue symbolically is also a monument to her.