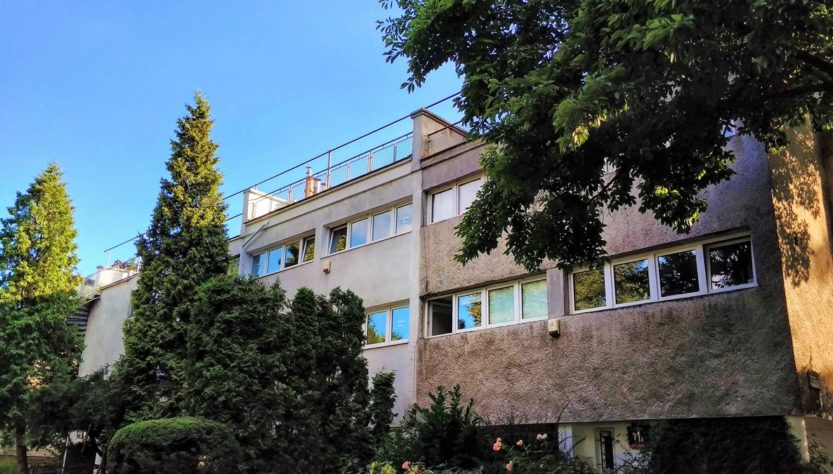 The Lacherts House (Willa Lachertów) was designed by Bohdan Lachert and Józef Szanajca in 1928 for Lachert’s family. It’s one of the first avant-garde houses in Poland and iconic achievement of Polish modernist architecture. It`s considered the second Polish house built according to Five Points of Modern Architecture of Le Corbusier.

This building is an icon of Polish architecture. However it takes a moment to appreciate because it’s not well maintained and from the street level you can’t really acknowledge the whole point of this modern design.

The house`s plan was influenced by Le Corbusier`s Maison Dom-Ino (1914-15) which supposed to be a modern “Machine for Living”. Polish architects created an experimental design which soon became an icon of Polish architecture.

It’s a long house with three units, flat roofs, horizontal windows and external ship-like spiral stairs leading to a rooftop terrace surrounded with barriers. The whole building should be white as it was originally (picture below), but nowadays each section is painted in a different color which interferes with the design.

The internal division into 3 apartments, with differently treated levels is reflected in the garden elevation (picture above) and that’s my favorite part of this house. Windows here are large, some of them cover two floors, because there are two-storey living rooms.

This house is a “must see” for modern architecture fans. It`s located in Saska Kępa neighborhood which is a 1930s settlement full of iconic villas designed by the most outstanding Polish architects.