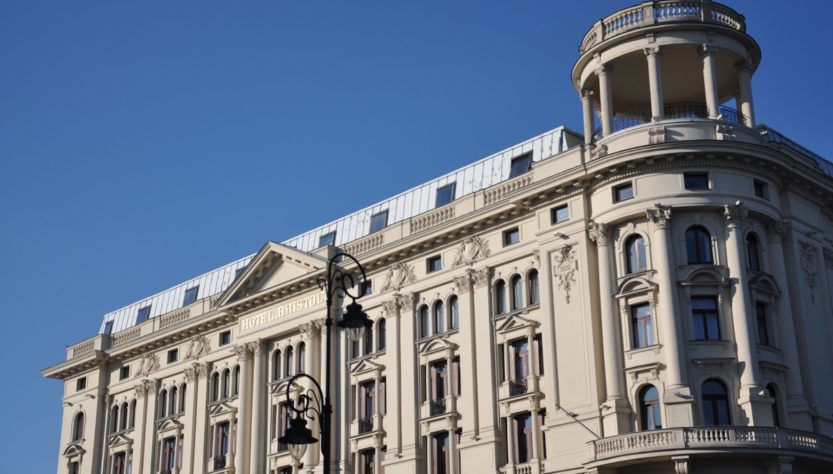 London has the Ritz, Paris has the de Crillon, and Warsaw has the Bristol. This is Warsaw’s oldest still operating hotel. During the Second World War only Nazis could stay in this hotel. The building survived the war as the one of the few in the area.

The hotel was built between 1898 and 1901 just next to the Namiestnikowski Palace which is today the headquarters of President of Poland. It was designed by Władysław Marconi in Neo-Renaissance style with Art Nouveau interiors.

The Bristol Hotel has hosted such famous guests as John Fitzgerald Kennedy, Queen Elizabeth II, the Emperor of Japan, Sofia Loren, Ray Charles, Tina Turner, Woody Allen, Placido Domingo and Bill Gates. Maria Skłodowska-Curie celebrated her winning the Nobel Prize here, even though it was rumored that she was looking forward to the party to be over. Polish tenor, Jan Kiepura who achieved international fame during the period between the wars, once sang from Bristol Hotel`s balcony.

You should visit the legendary Cafe Bristol (entrance on the corner) which was opened in 1901 and quickly became the capital`s most chic place visited by Warsaw intelligentsia. The cafeteria is known for its great coffee and delicious cakes based on seasonal ingredients. Check out the Marlene Dietrich autograph on the wall signed while visiting Cafe Bristol in 1964.

The Column Bar is an another of Bristol`s treasures you must see if you like elegant cocktail bars. Here you can try exquisite coctails in breathtaking surroundings. The original interior designed by Otto Wagner the Younger in 1901 is a true Art Nouveau masterpiece. Wagner was an Austrian and he designed many important buildings in Vienna at he time. It was painstakingly restored in 2013 with respect to its original style and design. Enjoy live piano music every Friday and Saturday between 2:00 – 5:00 pm.