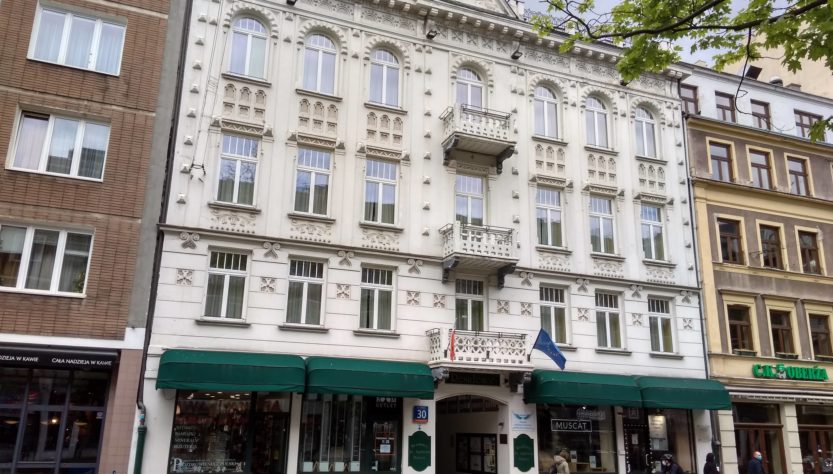 This house is an interesting implementation of Polish wooden architecture from the Tatra Mountains (Podhale region) in a non-wooden urban environment. It`s the only building in such style in Warsaw and one of the few to survive the Second World War in this area.

This facade was created in 1906 by Jarosław Wojciechowski. The architect was inspired by new wooden buildings in Zakopane, being themselves an interpretation of traditional architecture of Podhale region with an Art Nouveau twist.

The building’s style (Polish: styl zakopiański) came from attempts of creating a Polish national style of architecture while Poland was still ruled by the Russian Empire, Prussia and Austria-Hungarian Empire. Other ideas were focused on Middle Ages and Polish Gothic architecture, perhaps cause it would be difficult to rebuild a tall Gothic tower into a Russian style onion dome. In Warsaw it happened to the Staszic Palace and the Piarists Church in the 19th century.

Searching for national style was a larger trend in European countries in the 19th and early 20th centuries, especially in architecture. Such style supposed to be associated with traditional forms of different countries. It was very popular to use elements from folk and native art. The goal behind it was to strengthen national or even nationalist identities.